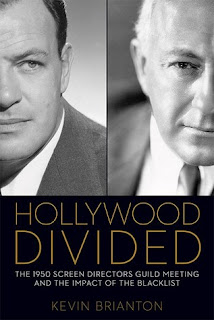 On October 22, 1950, more than 500 directors met at the Beverly Hills Hotel for a Screen Directors Guild meeting. The topic on hand: Cecil B. DeMille’s call for the dismissal of SDG’s president Joseph L. Mankiewicz. Many big-name directors including John Huston, John Ford, Rouben Mamoulian and many others would deliver speeches either for or against the recall. This meeting occurred during the thick of the Hollywood backlist era and quotes from the speeches would live on for decades sometimes morphing into different variations. It represented what Kevin Brianton, author of Hollywood Divided, calls “one of the bitterest chapters in American cinema history.”

It’s easy for us to put the people involved in this meeting into two distinct camps: liberals and conservatives. And depending on your political views these two camps would also carry the label of good people and bad people. It’s true that liberals were eyed as potentially dangerous because they were most likely to have ties to Communism. And it’s also true that conservatives led the charge to seek and oust industry members who they thought were clearly Communist. However, as Brianton explores in his book, the divide between liberals and conservatives wasn’t always very clear. Some directors attending the meeting identified as Republican yet made very liberal movies. Others considered liberal sometimes leaned conservative. On DeMille, Brianton explains “it would seem that his rigid conservative ideology drove him one direction, while his personal afflictions tugged him another way.” In this book, Brianton breaks down the different motivations and ideologies of many of the top directors involved in this infamous SDG meeting and we discover that not everyone, even the two big players in all of this DeMille and Mankiewicz were as clear cut in their two political camps as most people like to think.

Brianton’s book is incredibly detailed. Everything you could possibly want to know about SDG’s 1950 meeting can be found within its pages. Its meticulously researched and told in a very unbiased way. The first part of the book explores the events that lead up to the meeting. The second part breaks down almost minute by minute the events of the gathering. And the third part explores the meeting’s legacy and the myths that came out of the oral history of that important moment in film history.

I was interested in learning about DeMille’s background and how he lead the charge of many conservative movements in the industry even as early as WWI. Directors Mankiewicz and Ford and their motivations and actions are explored closely as well. I’d love to read some additional books exploring the Hollywood Blacklist. Actor Robert Vaughn wrote a book called Only Victims: A Study of Show Business Blacklisting which I have my eye on. If anyone were to write a book about how films before, during and after the blacklist era both had an effect on the blacklist and were affected by it, that would be a book I’d pick up immediately. If anything this slim volume on one aspect of a dark moment in Hollywood history whet my appetite for more reading.

If you’re researching the Hollywood blacklist, Kevin Brianton’s Hollywood Divided is a invaluable resource. If you’re looking for an overall history of this era, this book would only be a supplement to your reading but still worth your time.

Thank you to University Press of Kentucky for sending me a copy of this book to review.